Preserve the Baltimore Uprising
Preserve the Baltimore Uprising is a digital repository that seeks to preserve and make accessible original content that was captured and created by individual community members, grassroots organizations, and witnesses to the protests that followed the death of Freddie Gray on April 19, 2015. Gray died from injuries sustained while in police custody in Baltimore, Maryland. A freely available resource for students, scholars, teachers, and the greater community, Preserve the Baltimore Uprising seeks to ensure that the historical record of these events will include diverse perspectives from people whose lives have been directly impacted by the complex events surrounding the conflicts in Baltimore. People are invited to contribute original digital content, including photographs, video, audio, and stories related to memorials, community meetings, rallies, and protests occurring in Baltimore and the surrounding Baltimore County and City neighborhoods.

A People's Archive of Police Violence in Cleveland
A People’s Archive of Police Violence in Cleveland exists as an online archive to collect, preserve, and provide access to the stories, memories, and accounts of police violence as experienced or observed by Cleveland citizens. Organized in the summer of 2015 by a combination of Cleveland residents and professional archivists from across the United States, the Archive hopes to provide the Cleveland community--especially survivors of police violence and the families of victims--a safe and secure space to share any testimony, documents, or accounts that narrate or reflect on encounters or effects of police violence in their lives or communities.

Documenting Ferguson
Documenting Ferguson is a freely available resource that seeks to preserve and make accessible the digital media captured and created by community members following the shooting death of Michael Brown in Ferguson, Missouri, on August 9, 2014. Our project has the ultimate goal of providing diverse perspectives on the events in Ferguson and the resulting social dialogue. Contribute your voice to the discussion by adding your images, videos or personal stories to the collection.

Baltimore 68: Riots and Rebirth
Langsdale Library Special Collections, University of Baltimore
http://archives.ubalt.edu/bsr/index.html
To advance the scholarship, encourage civil discourse and simply shed light on this important topic, the University of Baltimore has established a Web presence for its work on "Baltimore '68." This site should be considered a work in progress: Its only constant will be change, as more is discovered about what happened in the city in April 1968, and a better understanding of that time is reached 40 years later.

#FreddieGray Social Media Imagery in the Archive
Ed Summers, April 25, 2015, published in On Archivy, Medium
Ed Summers discusses his and Bergis Jules' work with tweets that included media in response to Freddie Gray's arrest. A viewer was created for #FreddieGray imagery being shared on Twitter. This article details how it was assembled and why.

#FreddieGray Media Viewer (give it a few minutes to load with all the tweets).
http://edsu.github.io/freddiegray-tweet-viewer/ 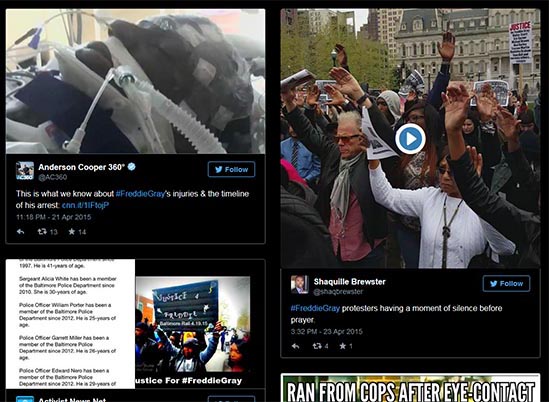 Hashtags of Ferguson
Bergis Jules, April 24, 2015, published in On Archivy, Medium
Bergis Jules discusses working with Ed Summers to figure out an effective strategy to "get at digital content that is actually related to Ferguson and helps document the events." 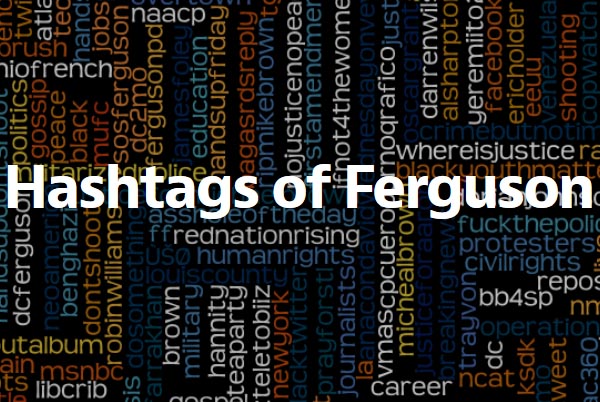 Sketch of #FreddieGray media waiting for court to begin this morning in trial of officer Porter pic.twitter.com/TkQFKoumB1