CONTENT WARNING: This guide references topics such as police brutality and anti-Black racism. 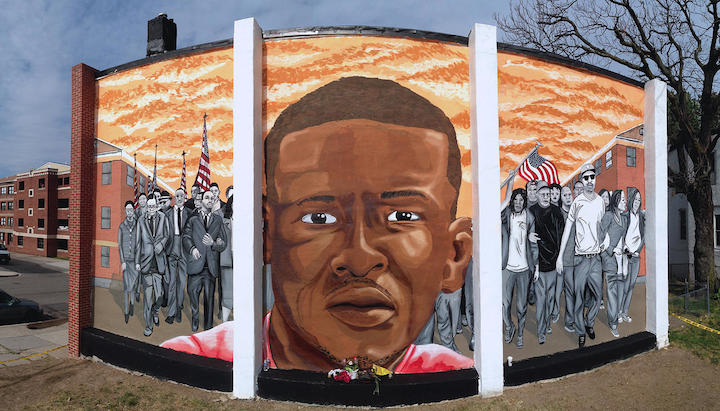 Please note the core resources on this guide were added in 2015.

The purpose of this guide is for students, faculty, and interested parties to use the resources found here to investigate and understand civic unrest, with a particular focus in Baltimore, from 1968 through present day using books, articles, images, art, archives, and more.

Last updated: June 2020 in the wake of the deaths of Ahmaud Arbery, George Floyd, and Breonna Taylor at the hands of police and private citizens, all taking place during a global pandemic (COVID-19) that has proven to disproportionately Black communities, as well as Indigenous, Latine communities, and other people of color.

This guide was originally made by Jennifer A. Ferretti, Digital Initiatives Librarian at Decker Library, 2015-2021. Please direct questions to refer@mica.edu.

Civil Rights protests took place in Baltimore City well before the better-known and violent sit-ins of the south during the 1960s. The city suffered under Jim Crow laws, where segregation was legal in housing, education, and employment. We can find documentation of organized protests of these discriminations and racism beginning around 1935, which was when Dr. Lillie Carroll Jackson, president of a National Association for the Advancement of Color People (NAACP) Baltimore chapter was elected president of this branch, becoming the first woman in the country to hold this position.

On April 12, 2015, 25 year old Freddie Gray was arrested in West Baltimore after making eye contact with an officer and running in the opposite direction. While in police custody, Gray suffered a spinal cord injury that caused his death on April 19th. The police report indicates a knife was found clipped to the inside pocket of his pants after being arrested and that "The defendant was arrested without force or incident." The report continued, "during transport to Western District via wagon transport the defendant suffered a medical emergency and was immediately transported to Shock Trauma via medic." A video shot by a bystander as well as a separate surveillance video shows Gray being dragged to the police van. According to official accounts, he was placed face down on the floor with no seatbelt or other restraint. Unrest in the wake of Gray's death took place and on April 27th (day of Gray's funeral), when violence erupted at Mondawmin Mall. A large group of officers converged on the parking lot of the mall as students arrived. Unrest spread to other areas of the city and a city-wide curfew was set as well as a declared state of emergency. Six police officers involved in the arrest of Freddie Gray were charged formally for his death by Baltimore's State's Attorney Marilyn Mosby on May 1st. On May 21st, a grand jury brought charges against all six officers officers involved. The result was all charges were dropped against the officers.

About Searching for Resources

Consider using synonyms for your search terms. Some refer to the Baltimore Uprising as just that, some refer to it as "Baltimore Riots," "Unrest," "Protests," etc.